Home › History and traditions › Where are all the women?

Where are all the women?

Everyone – this blog included – talks about the famous men of the waterways. The great engineers, like Brindley, Telford, Jessop and Rennie, who made it all possible. The working men through the ages. Tom Rolt and Robert Aickman, who rescued the canals from closure. But where are the women?

You might catch an occasional glimpse of a woman in an old picture of working narrowboats, probably with the caption “wife of narrowboat owner hard at work”. You might see another old picture, this time of some young women leaning next to a boat – one of the Idle Women who were sent to work on the canals in WW2. But that can’t be it, right?

So here’s a little roundup of famous women of the waterways. In no particular order and by no means exhaustive.

Idle Women
Rubbish name for them, as being sent during WW2 to work on narrowboats hardly makes you idle. Anyway, more on them here: http://www.independent.co.uk/life-style/the-truth-about-the-idle-women-of-the-canals-some-extraordinary-wartime-volunteers-are-together-again-after-45-years-angela-lambert-joins-them-1531552.html

Angela Rolt
Tom Rolt’s first wife. Now I’ve read his book, and so you’d think I’d know a lot about her. Here is what I gleaned about Angela from reading Narrowboat:

As I read the book, I grew more and more fascinated with this shadowy, enigmatic cipher of a woman. What did she think about the trip I wondered? Where was she from? Did they love each other or was it a marriage of convenience because they both fancied a jolly time on a boat? I think I read somewhere else that she ran away from Rolt to join the circus. 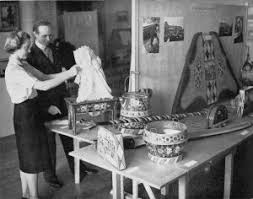 Sonia Rolt
Another Rolt woman! A second marriage for both of them; Sonia had previously been married to one George Smith, one of the last working boatmen. She worked on the canals during the war. I get the impression that, in the 1940s at least, being “into narrow boats” was a massive euphemism for a racy, hedonistic life of husband- and boyfriend-swapping. A bit like Jilly Cooper but with boats not horses. More on Sonia – and a nice photo of her too – here:  http://www.ltcrolt.org.uk/sonia.htm

Elizabeth Jane Howard
Secretary of the IWA, Aickman describes the great author herself as “one of the most brilliant [of women]” and a bit of a looker “so beautiful that continuous problems arose, especially when, at a later date, she joined the Association’s Council. Little in the way of completely normal business was possible or sensible, when she was in the room. …  By merely existing, she promoted loves and hates which, through no fault of hers, left some who felt them, fevered and wasted”. Aickman, I despair. I really do. Words can’t express how I feel right now.

Maureen Shaw
At Wardle Lock, near Middlewich, I stumbled across this little photo on a display by the side of the canal. Maureen (1934-2012) was adopted by boaters, spent her life around boats and acted as unofficial lock-keeper at Wardle for years. Go Maureen.

That’s it. That’s all the women I’ve come across. And I’m pretty darn sure that these women were far more talented and contributed far more to the waterways than their (male) biographers have presented here. And I’m also pretty sure that there must be more examples of great women of the waterways. If anyone knows of any, let me know…

Posted in History and traditions

8 comments on “Where are all the women?”