Home › History and traditions › An A-Z of the waterways

An A-Z of the waterways

The language of the cut can be a minefield, littered with jargon, in joke, traditional terminology and neologism a-plenty. I’m sure there are many worthy tomes that can teach you to ditch port and starboard in favour of on-side and off-side, so the following glossary seeks only to list some of our favourites so far. 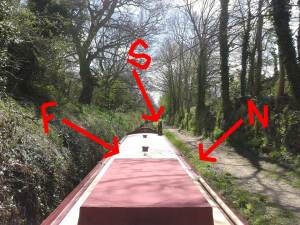 ANCHOR
n
Expensive piece of kit that you buy at first visit to chandlery, because you have been told that it is very important to have one for use in an emergency on rivers. Then you get a day’s boat handling tuition, and learn that if your anchor was ever deployed it would probably rip the front of your boat off, and you start to think that maybe you never, ever, ever want to use the thing that you’ve just sunk a load of cash into.

CONTACT SPORT
n
Term to describe the act of boating, often used by boaters as form of placation after they have crashed into your boat in a lock, when passing in a tight spot, when trying to moor up next to you etc. As in, “Don’t worry mate, it’s a contact sport innit”. There is no suitable reply to this, other than to grit your teeth, remember how many times you’ve bumped into other people, and smile politely. You must definitely not retort, “I don’t mind you bumping into me, but next time could you try to do it at something less than full speed?”.

DECORATION
n
A thing to obsess over. Can come in various forms, eg:

ETIQUETTE
n
A minefield of social faux-pas waiting to explode, especially in the faces of novice boaters. Always quite satisfying when you master a new bit of canal etiquette though; it’s lovely to feel part of a club, even if it does have peculiarly unexpected rules.

GONGOOZLE
v and n
Any non-boat (passers-by, tourists, locals etc) who stops at a flight of locks to observe passing boaters in action. Also the action, as in: “those gongoozlers were gongoozling at Foxton Locks today”. Children make the best gongoozlers as they are usually only too happy to be roped into doing all the hard work while I just stand at the tiller and proffer sage advice. Am now ardent supporter of child labour.

HOLE
n
Should be pronounced ‘ole. There are lots of holes on the canal. There are bridge holes; that would be the bit of the bridge that the boat goes through. There are fan holes; term used to describe how deeply the blades of your propeller go into the water (so, if canal is shallow and your propeller is stirring up mud from the canal bed – that’s “too much fan ‘ole”). And there are engine holes; the bit of the boat that holds the engine – it is good etiquette to keep it clean, free of water and generally presentable. I’m sure I’ve forgotten a hole or two, too.

IWA
n
Inland Waterways Association. One of the many organisations of the canals, this one has long been devoted to restoring and preserving the waterways – slogan used to be (might still be?) “every last mile”. Different to Canal & River Trust – which is now a charity, but used to be the government department responsible for maintenance. It was then called British Waterways Board and people still refer to CR&T as BW.

JUNCTION
n
The meeting of two canals. A perennial anti-climax. Every time I hear that we are about to approach a junction, even though I should know better, I imagine something like Piccadilly Circus only with narrowboats. The blaring of horns, roaring of engines as they slam into reverse to avoid collision and general hubbub of my imagination is always replaced by the reality of no boats, illegible signs almost totally obscured by vegetation, and a corner that creeps up on you with no warning.

KEY
n
Locking and unlocking device, found in many different forms on the canal. There is the BW key – magic key, produced by the erstwhile British Waterways Board, now CR&T (see IWA above) that opens all sorts of things including sanitary stations, secure moorings, toilets and the odd swing bridge. There is the anti-vandal key (AKA handcuff key) – this unlocks the mechanism used to prevent youths from letting all the water out of locks. There is the windlass (used to open paddles at locks) – AKA a key, I don’t know why. Etc ad infinitum, I suspect.

LOCK-KEEPER
n
God. All orders must be obeyed immediately. But as this is Britain, no need to sacrifice your first-born or nearest virgin at the altar of the lock-keeper; a biscuit will suffice. Often observed hanging out by locks with bright blue Canal & River Trust sweater on and a hefty windlass in hand, waiting for said biscuit.

MOP
v
Cleaning activity, undertaken regularly (ie when guests are about to arrive). Was once conducted with bucket and hot water, until too much water was applied to floor, water got into cabin bilge by mistake, water was found and mistakenly thought to be result of massive leak that would cause us to sink imminently, Felucca’s owners paced the boat with hands in hair and cries of despair until we remembered the over-zealous mopping. Now completed with those fancy wipe things to avoid panic.)

OIL
n
Keeps our engine going, must be checked daily, a devil to change (see instructions here), always finds its way onto Tom’s shorts, especially when they have just been washed.

POLISHER
n
Evocative yet pejorative term used to describe those boaters who fuss and fret about maintaining their boat in pristine, polished perfection. We have seen some boaters hog a water point for hours in order to shampoo, condition and polish every inch of their vessel, despite a queue of people waiting to fill up with drinking water. (Another equally pejorative term is hirers – must be said with dripping scorn to describe those holiday makers still unfamiliar with arcane cut etiquette or the finer arts of boat handling, like steering. Oh yes, and another is continuous moorers, used by some – again with dripping scorn – to imply that those people who live on their boats will be unwashed vagabonds who hog all the good mooring spots and generally lower the tone.) Sometimes I suspect that Britain is not the polite, pleasant, laid back country the Daily Telegraph claims it is after all.

QUEUE
v and n
Often found at locks, swing/lift bridges or obstructions. Can cause arguments about precedence, though we’ve never seen any come to blows yet (mostly, we suspect, thanks to presence of lock-keepers – see above – at particularly popular points on the network). The frustration caused by queuing is best alleviated by a cup of tea and a biscuit.

RIVERS
n
A necessary evil. Requires an anchor (see above). As in: “if you want to get from Stourport to Worcester, you will have to brave the necessary evil of the Severn”.

TUNNEL
n
Dark, narrow and low. Comes in a variety of lengths and difficulties. Can cause palpitations in nervous drivers. Requires light to be affixed to front of boat. Always best to test your light works well in advance of navigating your first tunnel, to avoid the drama of finding a loose connection just as you are about to go through Husbands Bosworth tunnel. For example only, obviously.

UNDERBRIDGE
n
Fabulous synonym for aqueduct, as seen on the Bridgewater Canal.

VOID
mostly v, occasionally n
To empty one’s bladder or gut. Can be done off-boat (in which case “a strategic void”) or on boat (which will lead to discussions about whose turn it is to empty the “cartridge” at a “sanitary station” – now that’s a euphemism that hides a variety of sins).

X
n
The little mark that we make in our book and on our online map, to chart our progress around the waterways. Sorry, bit lame, but x is a notoriously stroppy letter.

YOGHURT POTS
n
Fibreglass cruisers, often seen throwing themselves along the cut at terrifying speeds, regardless of the fact that 15 tons of steel narrowboat might be just around the corner, ready to crush them as easily as you or I might crush a…yoghurt pot. AKA pepperpot (Emily neologism, useless to ask why) or gin palace.

ZOUCH
n
Place name. Pronounced ZOTCH when village on the River Soar in Notts; pronounced ZOOSH when part of name of Ashby-de-la-Zouch in Leics (the Ashby Canal was supposed to get there but never made it). I love all the weird and wonderful place name pronunciations that we’ve come across; they are part of what makes Britain such a brilliantly bonkers place.

Posted in History and traditions, Life Aboard, The Boat